In June 2021, the ClimateActionWR collaborative released our community’s long-term strategy and short-term plan to reduce greenhouse gas emissions in Waterloo Region 80% below 2010 levels by 2050, with an interim community goal of a 50% reduction by 2030. ClimateActionWR works collaboratively with local organizations, community members, and all eight Waterloo Region municipalities to transition our community to an equitable, prosperous, resilient, low carbon future and achieve our ‘80by50’ and ‘50by30’ goals. This work is done in accordance with the Paris Agreement and Canada’s pledge to reach net-zero by 2050. Read the TransformWR strategy here.

As we work towards our goals, it is important to also take time to celebrate the great accomplishments that have already been achieved. Throughout the past few years there have been many success stories that deserve to be highlighted. The “Township Success Series” is meant for us to reflect and celebrate these local projects within Waterloo Region’s Townships.

Climate change has become an increasingly common topic in today’s news. While it is important to stay informed, the news tends to be predominantly focused on the negative aspects of this global environmental issue. It can be extremely draining to be exposed to this on a regular basis, and it is therefore necessary to include a good balance of positive stories as well. We would like to highlight a project that has achieved some recent success in Waterloo Region; the Mike Schout Wetlands Preserve. 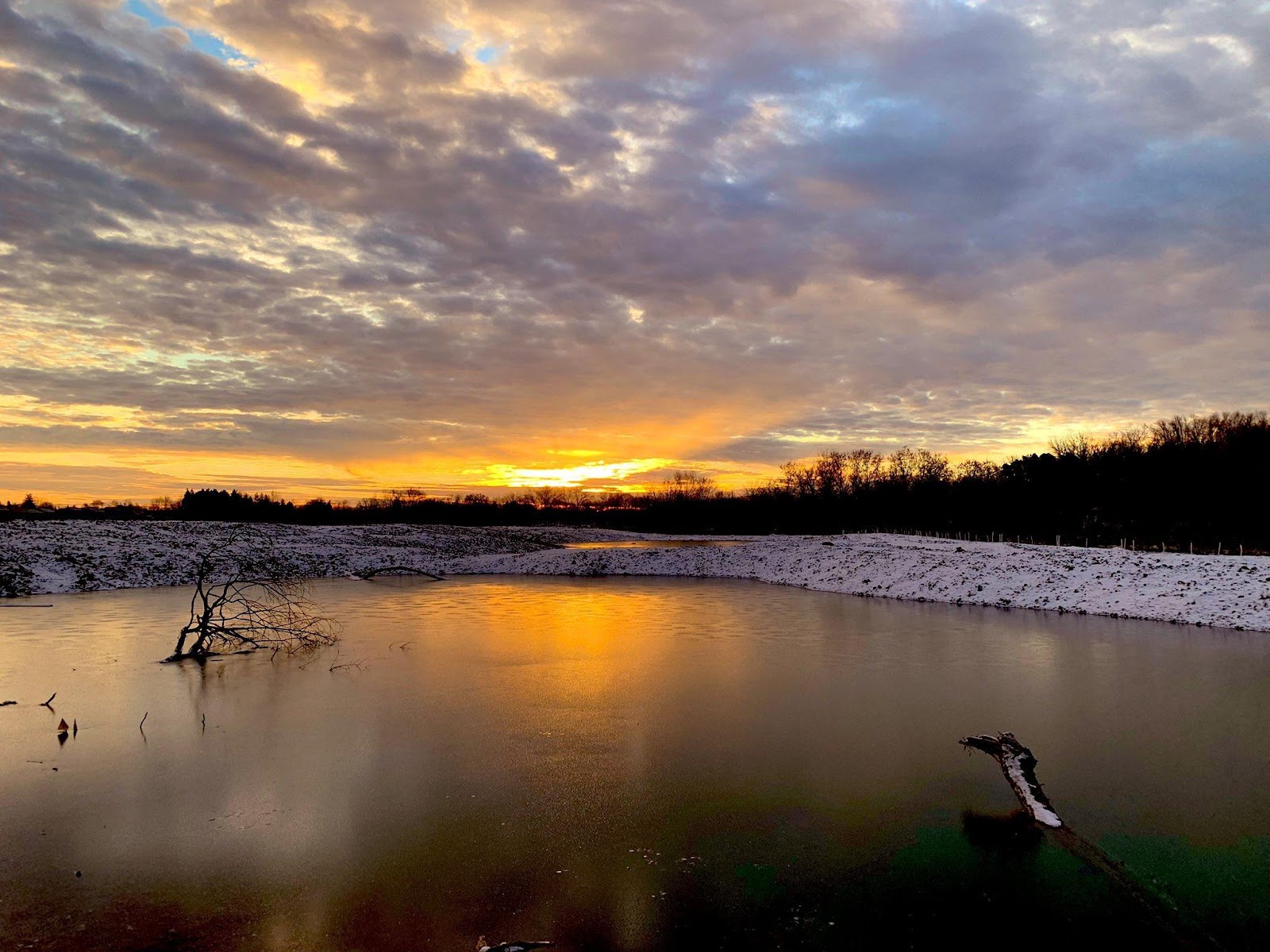 How did this project get started?

Back in September 2019, Mike Schout (the President of Stonecroft Corp. in New Hamburg) pitched the idea for a wetland restoration project to the Wilmot Township Council, along with a generous donation of 1.5 million dollars. The project was authorized shortly after, launching this multi-year naturalization project. Mr. Schout’s donation is estimated to pay for roughly half of the project, while federal government funds will cover 75% of the tree planting cost. Kitchener Wilmot Hydro has also given funding to introduce blue heron habitat and nesting grounds within the preserve, and the project is expected to receive additional grants as well. Ducks Unlimited Canada, represented by Board of Directors member and wetland conservation designer, Philip Holst, and habitat specialist, Jeff Krete, has also been a large supporter of this initiative, offering instrumental help in the planning and engineering of these wetlands. After much planning, the project was able to get started last year. On May 7th, 2021, the first of 4,000 native trees and shrubs were planted at the site – as seen in the image above – by Mike Schout (left) and Philip Holst (right) in collaboration with the Grand River Conservation Authority (GRCA) and Forests Ontario. In mid-July 2021, site preparation began for the pollinator meadows in anticipation for planting in early fall. In September, the GRCA approved the overall project design, which was already endorsed by the Township Council, allowing for contractors to begin sculpting the wetlands. Most recently in early November, community volunteers supplied by Let’s Tree Wilmot, part of the Wilmot Horticultural Society, participated in a successful tree planting event on site.

Where is this project located?

We would like to acknowledge that this land was in the care and possession of Indigenous communities for many thousands of years. This plot lies within the traditional territory and treaty lands of the Mississaugas of the Credit First Nation, Mississauga, Attiwonderonk (Neutral), and Anishinabewaki Indigenous Nations.

The Mike Schout Wetlands Preserve is located on a 55-acre plot of former farmland off Smith Creek Drive in New Hamburg, within the Township of Wilmot. What was previously a cornfield adjacent to the Nith River will be converted into a beautiful and functional wetland through this impressive naturalization project. Below (top image) is a satellite view of the site prior to the project’s commencement, with a draft concept plan indicating all the proposed features including trails and boardwalks throughout the wetlands, lookouts, meadows, and plenty of trees ( bottom image). 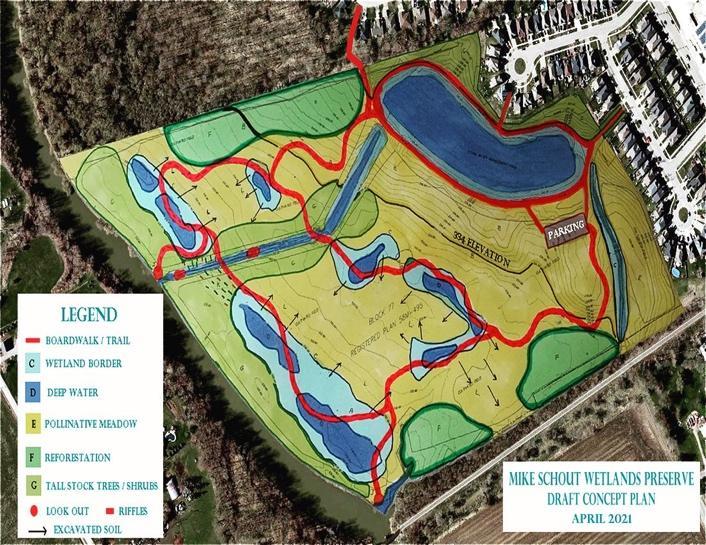 Why do we need wetlands?

Wetlands are effective net carbon sinks, and as a result, wetland preservation and restoration are essential steps towards climate action. They sequester atmospheric carbon predominantly through plant photosynthesis, which is then stored in living plant tissues, in addition to organic matter (known as peat), soils, and sediments, where it can remain for hundreds to thousands of years. While young growth forests act as better carbon sinks than wetlands overall, wetlands serve as the largest natural terrestrial carbon storage mechanism in the world, holding about 60% of the carbon contained within Canadian soils. Peatlands are wetlands where peat has built up over time due to consistent waterlogged and low oxygen conditions that inhibit plant material from fully decomposing and are the best type of wetlands for carbon storage. When left untouched, peatlands can store more carbon than all other types of vegetation on the planet combined!

Unfortunately, wetlands are disappearing at an alarming rate! Approximated 70% of former Canadian wetlands have been destroyed, paved over, degraded, or converted into agricultural land. Wetlands are also being greatly impacted globally by deforestation and other land-use change, as well as forest fires (which are becoming increasingly common due to climate change). Since they store so much carbon, they have the potential to become a net carbon source when disturbed. This wetland preserve is therefore an essential undertaking which will not only benefit the community and promote ecological conservation, but it will also contribute to carbon sequestration and storage, thus mitigating some of the Township’s greenhouse gas emissions.

The vision for this wetland preserve is for it to serve as a natural carbon sink (with many other ecological benefits) while simultaneously creating a peaceful recreational and educational space for all members of the community. A main goal of the project is to provide a network of wetlands to reduce urban stormwater run-off from New Hamburg before it reaches the Nith river, which will offer flood storage capacity and improve the overall health of the river over time.

Within the preserve, the wetlands will take up about seven acres and will offer a safe habitat for many aquatic species. At present, this site has very few animal inhabitants, but the project aims to change that with roughly ten acres within the thirty-acre meadow being dedicated solely to pollinator plants, which will provide a welcoming environment for bees, butterflies, and various other insects. This insect diversity is expected to drive an influx of bird and other wildlife populations towards this area. The trees and other flora that will comprise much of the remaining land were specifically selected to promote biodiversity as well. No official opening date for the preserve has been announced as of yet, since construction and naturalization only just began last year. The planting at the site is a work in progress, and volunteer projects to assist in this process are currently underway. The meadow is anticipated to take 3 years to reach full splendor, and the trees and other vegetation will need time to grow as well. While this project is not explicitly reducing the emission of greenhouse gases in Waterloo region, ecological preservation – particularly concerning natural carbon sinks – is a vital step towards effective climate change mitigation, as it allows the sequestration of carbon that has already been emitted into our atmosphere. Hence, this project offers an important contribution to ClimateActionWR’s community climate action goal of an 80% reduction in emissions by 2050.

For further information about this ongoing wetland restoration project, please visit the Township of Wilmot website, and be sure to keep an eye on the Mike Schout Wetlands Preserve Twitter feed for upcoming volunteer opportunities.

Get our Monthly Community Action Report

Stay up to date on progress towards our goal